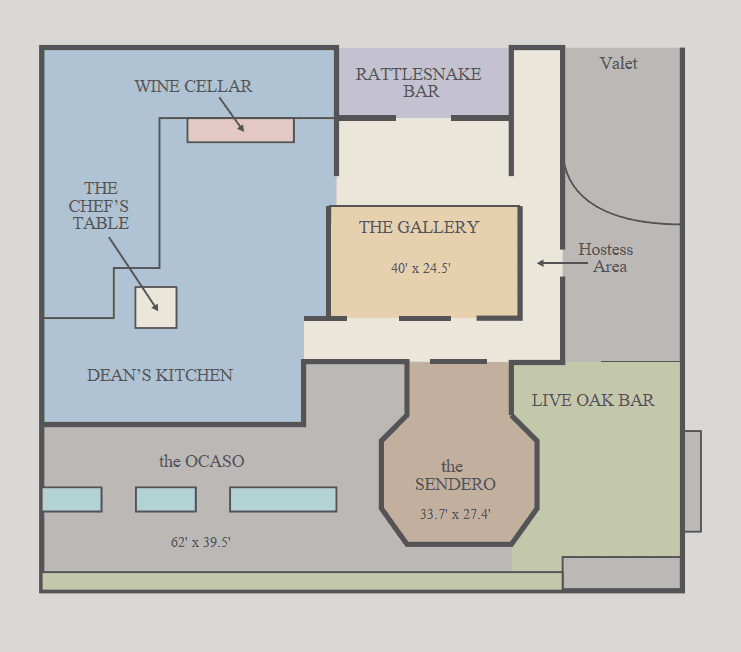 Since its opening in 2007, Fearing’s has been named “Restaurant of the Year” and “Table of the Year” by Esquire Magazine, as well as #1 in Hotel Dining in the U.S. by the prestigious Zagat Survey. The restaurant was nominated by the James Beard Foundation as Best New Restaurant, and it is currently included on top national lists by TheDailyMeal.com, Gayot.com and many other influential food websites.

A lively, interactive display kitchen where guests can dine under a rawhide chandelier and watch our chefs in action

This is the ultimate alfresco experience. Spanish for “the path”, The Sendero’s movable glass walls allow for a temperature-controlled or open-air setting with beautiful views of the outdoor gardens and water features.

Our newly renovated dining patio is enclosed by a plexiglass exterior, centered amidst towering trees and lush landscaping. The Ocaso offers the best outdoor dining in central Dallas. Ocaso means sunset in Portuguese.

An intimate, romantic setting for up to sixteen people, with a soaring, vaulted stone ceiling and vast array of wines. An oak table carved from a single tree is lit from above by a rustic chandeliers and is surrounded by wine enclosed in glass that can be frosted to conceal.

Premier elevated location in the midst of lively Dean’s Kitchen. Named America’s “Table of the Year” by Esquire Magazine, The Chef’s Table offers personal visits and close-up views of the chefs in action.